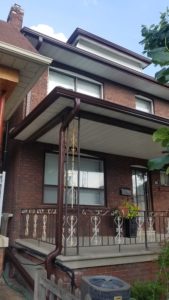 There are so many components involved in maintaining your home and keeping it safe and operational, and your eavestroughs and downspouts are one of them. Having an eavestrough system that works properly is incredibly important. Otherwise, you could find your home vulnerable to water damage, which is never fun to fix.

Without a proper eavestrough system, water from rain and snow will be allowed to pool against the structure of your home, eventually making its way into your home and causing a lot of damage and a hazardous interior environment for you and your family.

That’s why it’s important to keep tabs on your eavestroughs and all of its components in order to make sure it’s working the way it’s supposed to. But sometimes eavestroughs and downspouts can get clogged, which can interfere with the way in which the system works.

But how can you tell? Here are some signs that your eavestroughs are clogged, and what to do about it.

Do you notice that even after a major rainfall, the downspouts aren’t letting out nearly as much water as you would have expected? If so, that could be a telltale sign that the eavestroughs are clogged somewhere. If water is just trickling out of the downspout when it should be free-flowing, there could be an issue.

A blockage in a downspout usually formulates around an outlet or in the middle of the downspout. It could also be occurring at the bottom elbow. In any case, the clog will need to be cleared, or your eavestroughs can become damaged, in addition to putting your home at risk for water damage.

Issues With Your Eavestroughs

When there are problems with an eavestrough system that’s not the result of debris building up in the eavestroughs themselves, then the issue could be in the downspout.

Standing water in the channels of the eavestroughs or consistently overflowing eavestroughs could be the result of water backing up because of there’s a clog somewhere along with the downpipe that is impeding the flow of rainwater down and out of the system.

Clogs in downpipes could cause water to escape through the seams or joints of the downspout. If you notice any leaking occurring at the seams of your eavestroughs or downspout, then perhaps a blockage is causing the issue. If the clog has been there for a long time, the water in the pipes will eventually start to wear down the downspout sealant and cause leakage.

An eavestrough system can be negatively impacted by loose or dented downpipes. If downspouts are not securely fastened to your home, their alignment could eventually go out of whack, causing the flow of rainwater to suddenly stop. If this happens, your home could be in danger of water damage. Even the slightest dent in the pipes can cause major blockage in your eavestroughs and downspouts.

Maintaining your eavestroughs is one of the many jobs of a homeowner, but it’s a crucial one that should never be overlooked.

Luckily, there are professionals available who can tackle that job for you. Call Tip Top Trough today!